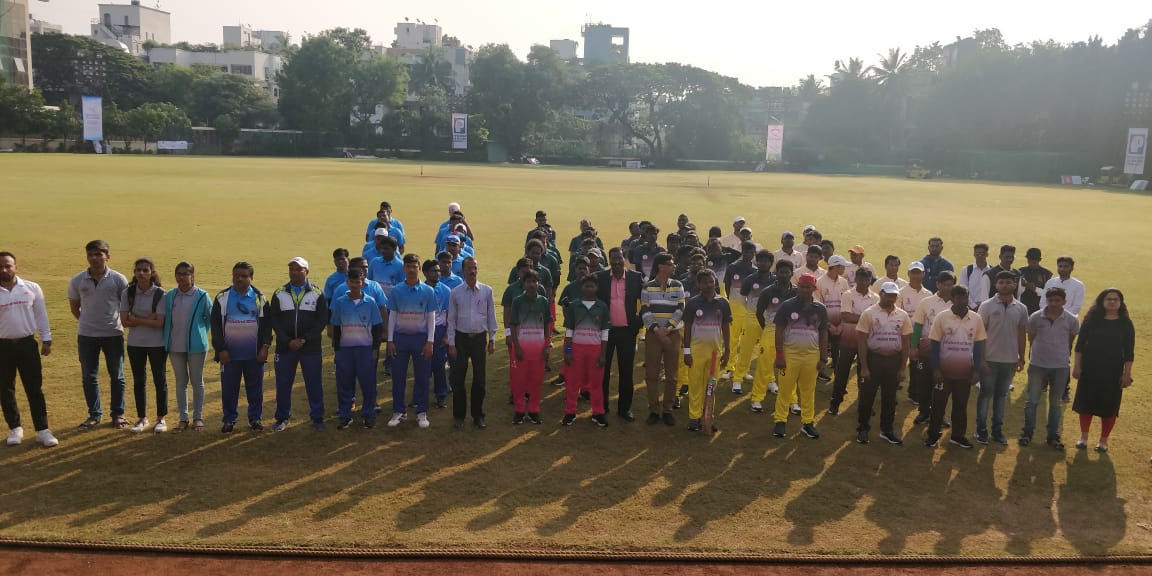 The Maharashtra leg of the second edition of the Indus Ind Nagesh Trophy 2019-20 kicked off in PYC ground Pune. Ample arrangements were made by the organisers and 4 teams including hosts Maharashtra, Tamil Nadu, West Bengal and Jharkhand were taking part in this leg. The customary National Anthem was played just before the first match between the hosts Maharashtra and Tamil Nadu.

The opening ceremony was attended by Mr Yashwant Bhujbhal, Ex-Chairman of Pune District Cricket Association, Mr Parag Mate, founder of River cleaning foundation project and Ms Caroline, a volunteer for River Cleaning foundation from Australia. Ms Zade, another volunteer from Canada also visited and got some knowledge of Blind Cricket.

Mr Parag Mate and Ms Caroline also played a couple of deliveries blind-folded and thus the Maharashtra leg kicked off. Ms Caroline flicked the coin during the toss, which was won by Tamil Nadu and they decided to put the hosts in. The hosts Maharashtra got off to a blazing start with the openers firing on all the cylinders. Dilip and Anil put up an opening stand of 118, which provided a perfect platform for the other batters to express themselves. Anil Belsare top-scored with 78 and Akshay provided the late onslaught with a knock of 42, which helped Maharashtra post an imposing total of 195/4. Chasing such a huge total was always a daunting task and Tamil Nadu never really got going. They started cautiously but lost wickets at regular intervals. They couldn’t get the partnerships going and it cost them the match in the end, losing by 57 runs. Anil Belsare was chosen as the Man of the Match.

The second match of the day was played at a different venue, The Deccan Gymkhana ground. West Bengal locked horns with Jharkhand. Jharkhand won the toss and elected to field first and their bowlers repaid the belief their captain had in them by bowling with discipline. They stuck to a tight line and never allowed West Bengal to get going. The West Bengal batters tried hard to cut loose but lost their way in the middle and got bundled out for a very less score. They were bowled out for 137 inside 20 overs. For Jharkhand, Rohit and Sanjeev took two wickets each. Chasing a par total, Jharkhand quietly started the chase, but soon upped the ante to romp home comfortably inside 17 overs losing only 2 wickets in the process. Nishit remained unbeaten on 55 and he was ably supported by Sujit and Sanjeev. Nishit William was the Man of the Match.

The last and the final match of the day between the hosts Maharashtra and Jharkhand were held again at the Deccan Gymkhana ground. Jharkhand, who had earlier won their first match chasing, decided to go with the winning formula and put the hosts Maharashtra into bat. The hosts got a jolt first up, when their premier batsman, Anil, who had top-scored in their 1st match got out cheaply. Dilip at the other end steadied the innings with a patient 39. Amol and Yogesh chipped in with the 20s in the middle and Pravin provided the much-needed impetus towards the end to help hosts Maharashtra to a decent total as they ended up on 166/9. After having successfully chased in their first match, Jharkhand got off to a bad start losing a wicket in the 2nd over. None of their batsmen got going, with only Nishit showing some resistance with a stroke-filled 41. The Maharashtra bowlers kept it quiet and with the support of their fielders, they managed to defend the total as Jharkhand could only manage 134. Dilip was adjudged the Man of the Match.