The Training Camp Shifted to PES College grounds from 23rd Dec’2017 onwards till 30th Dec’2017 and from 31st onwards shifted to BGS School Cricket grounds and concluded on 2nd Jan’2018.

Every day morning , the players gathered at 5.00 am The day started off with Yoga sessions which were conducted by Shri Prakash Guruji and Shri Raju from Pathanjali Organisation. The players were taught on Pranayama, Surya Namskar and other Yoga Asanas, followed by breathing techniques, concentration and meditation.

They had a warm up session for the first one hour followed by exercise. After a brief breakfast gap, the players had practicing net sessions. Mr.David- Coach, Mr.Saju Kumar-Asst Coach and Mr.Chandrashekhar –Manager of the Indian Team guided them on batting techniques. After Lunch, the teams were divided into two groups and a 10 overs match was played among the players. The preference of playing was given to B1 Category players both in batting and bowling. In the evening again the players had relaxing sessions. This includes bare foot walking on the grass, foot massaging, and body relaxation.

On 20th Dec’17, the players attended a function organized by Blind Cricket League at BEL Grounds. Mr.Mahantesh G K inaugurated the function. All the teams that took part in this Blind Cricket League wished the Indian Team and Urged them to Win the 5th ODI World Cup.All CABI players were felicitated at this function.

On 21st players had a water therapy session at HSR Club swimming pool. This sessions included walking exercise in the water, swimming and water jet therapy for hand, leg and back. They also attended a mediation camp at Paramdham Ashram-Bangalore.

On 24rth players attended a team building activity and the Drum circle activity conducted by Dfrens. “It’s been a tremendous experience for D’frens to lead us and set the stage for teamwork, on trusting each other, on building capabilities and pushing the limits.If you’ve never done a drum circle, then you should. This is one of life’s beautiful experiences packaged for players like us who are visually challenged” Remarked-Ajay-The Captain. “Unlike other entertainment oriented imitations, our drum circle is focused on audience like you. At the end of the session, your group will sense the achievement and motivation of having done something special and not just witnessed something special. This makes all the difference in trusting each other in a Team.” Remarked- Me.Hubert of D’Frens.

On Media side, the players were interviewed by Deccan Herald, Vishwavani.

The New Year started off with a bang for the Indian Team as they met up with the former Cricket Player Mr.Syed Kirmani. On arrival the players were introduced to him. Certain playing techniques and Some important tips for the Wicket Keeper were the highlights that were given by him. Mr.Kiramani also spoke about some of the matches he played wherein he played an important role in winning the titles for India. The players were also interacted with him by asking him some questions for which Mr.Kirmani guided them with the insights. He was presented with the Cricket ball by Mr.G K Mahantesh on the occasion who thanked Mr.Kiramni for having come and motivated the Indian Team. 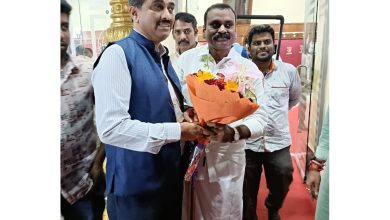 Dr Mahantesh G Kivadasannavar meets Dr.L.Murugan, Honorable Minister of State in the Ministry of Fisheries, Animal Husbandry and Dairying and Ministry of Information and Broadcasting, Government of India 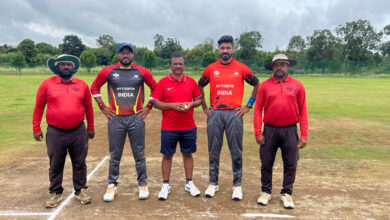 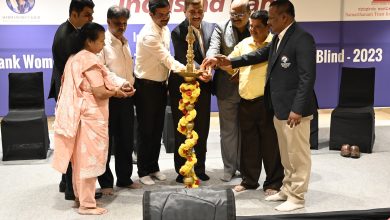 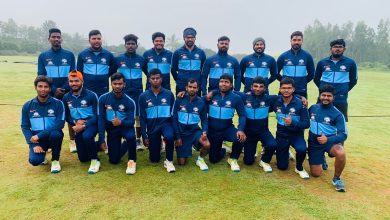